“US Officials Asked; How ISIS Got So Many Toyota Trucks"?

“US Officials Asked;
How ISIS Got So Many Toyota Trucks"? 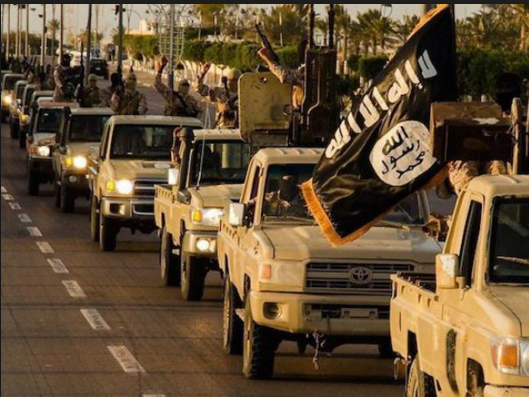 How did ISIS Get
400 New Toyota Pickup Trucks?
Answer:
From our Corrupt U S Government
Of Course!
U.S. counter-terror officials asked Toyota, the world’s second largest auto maker,  how ISIS had managed to acquire the large number of Toyota pick-up trucks and SUVs seen prominently in the terror group’s propaganda videos in Iraq, Syria and Libya,
Toyota said it did not know how ISIS obtained the vehicles and supported the inquiry led by the Terror Financing unit of the Treasury Department — part of a broad U.S. effort to prevent Western-made goods from ending up in the hands of the terror group.
The report cited Lukman Faily, Iraqi Ambassador to the U.S.
“This is a question we’ve been asking our neighbors,” Faily said. “How could these brand new trucks… these four wheel drives, hundreds of them — where are they coming from?”
Not surprisingly, it appeared the US Treasury was asking the wrong party. Instead of Toyota, the US Treasury’s inquiry should have started next door at the US State Department run by the liar Hillary Clinton.
Mystery Solved
Last year the US State Department had been sending in fleets of specifically Toyota-brand trucks into Syria to whom they claimed was the “Free Syrian Army.”
US foundation-funded Public Radio International (PRI) reported in a 2014 article titled, “This one Toyota pickup truck is at the top of the shopping list for the Free Syrian Army — and the Taliban,”
Recently, when the US State Department resumed sending non-lethal aid to Syrian rebels, the delivery list included 43 Toyota trucks.
Hiluxes were on the Free Syrian Army’s wish list. Oubai Shahbander, a Washington-based advisor to the Syrian National Coalition, is a fan of the truck.
“Specific equipment like the Toyota Hiluxes are what we refer to as force enablers for the moderate opposition forces on the ground,” he adds. Shahbander says the US-supplied pickups will be delivering troops and supplies into battle. Some of the fleet will even become battlefield weapons..
And the dirty corrupt Brits were also involved in the aiding of ISIS according to a British Independant 2013 news article.
The British government has also admittedly supplied a number of vehicles to terrorists fighting inside of Syria. The British Independent’s 2013 article titled, “Revealed: What the West has given Syria’s rebels,” reported that (emphasis added):
five 4×4 vehicles with ballistic protection;
20 sets of body armour; four trucks (three 25 tonne, one 20 tonne);
six 4×4 SUVs;
five non-armoured pick-ups;
one recovery vehicle;
four fork-lifts;
three advanced “resilience kits” for region hubs, designed to rescue people in emergencies;
130 solar powered batteries;
around 400 radios;
water purification and rubbish collection kits;
laptops;
VSATs (small satellite systems for data communications) and printers.
OUR OWN GOVERNMENT OFFICIALS
ARE GUILTY OF TREASON by the ACTS OF SUPPORTING TERRORISM
It’s fair to say that whatever pipeline the US State Department and the British government used to supply terrorists in Syria with these trucks was likely used to send additional vehicles before and after these reports were made public.
NO MYSTERY HERE ,  CORRUPTION IS EVERYWHERE
WHICH BRINGS US TO THE WISDOM OF an UNKNOWN AUTHOR, but is often ACCREDITED TO THOMAS PAINE

"The duty of the patriot is to protect his country from its government."
Posted by OrbsCorbs at 4:11 AM

Is this all really true?

Sad to say it is all true!
You support the criminal government.