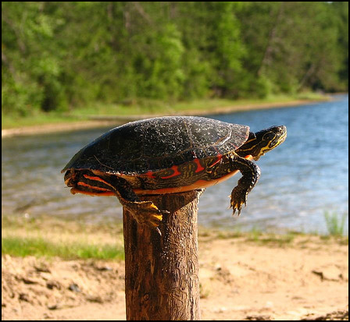 "While suturing a cut on the hand of a 75-year-old Texas rancher whose hand had been caught in a gate while working cattle, a doctor struck up a conversation with the old man.

"Eventually the topic got around to politics, and then they discussed the new congressman who was acting way too big for his shoes as a politician.

"Not being familiar with the term, the doctor asked him what a 'post turtle' was.

"The old rancher said, 'When you’re driving down a country road, and you come across a fence post with a turtle balanced on top, that’s a "post turtle."'

"The old rancher saw a puzzled look on the doctor’s face so he continued to explain.

"'You know he didn’t get up there by himself, he doesn’t belong up there, he doesn’t know what to do while he is up there, and you have to wonder what kind of dumb ass put him up there in the first place!'"
Posted by OrbsCorbs at 8:32 PM

Email ThisBlogThis!Share to TwitterShare to FacebookShare to Pinterest
Labels: politics